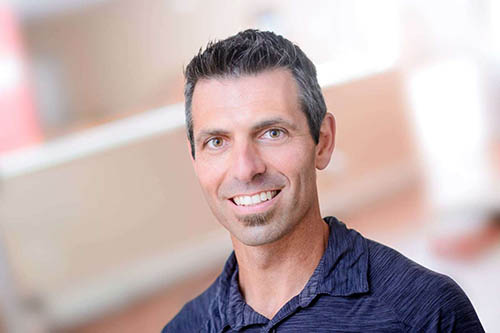 Owner and Physical Therapist Matt Pullano graduated from Union Endicott high school and continued his education at University at Buffalo where he received his physical therapy degree in 1997.

His interest in physical therapy began when he tore his ACL snow skiing at 15 years old. Following surgery and rehabilitation he discovered enjoyment in the exercise aspect of therapy. An additional intrigue with anatomy made for an easy choice of careers leading to physical therapy.

After working for large medical group locally, Matt made the decision to work for himself. In January 2004 Pullano Physical Therapy was formed with the intention to deliver one on one hands on care in an industry trending toward a hands off approach.

Orthopedic rehabilitation is a specialty that encompasses many facets. All of these progress best with a stable base. This base is the pelvis and spine, therefore Matt focuses firstly on that area as his specialty in rehabilitation.

Many of Matt's outside activities crossover with physical therapy experiences due to the injuries associated with the sports. He has competed from a regional to a international level in many sports including mountain bike racing, obstacle course racing, motocross, sport bike racing, car racing, running, golf, and waterskiing. As a podium finisher at a national level as well as national champion in some of the mentioned sports, Matt understands what it takes to step up on the day of competition and perform. It’s often the goal of the injured athletes to make an event despite injury and it would be very difficult to find a physical therapist more suited to help an athlete.